I am not and I have never been a big fan of Apple products and the reason is old and I have it since I got my hands on an interesting but (it turned out to be useless) gadget: Apple iPod Touch !

I bought the used product and everything seemed ok, but after I upgraded it, the sound stopped working and there was no way to use it. At that moment I understood that Apple is deliberately slowing, aging and even ruining their devices to force customers to buy new ones!

The latest scandal in which Apple and Samsung fined for deliberately slowing down phones didn’t even cool down well , as a new attempt to force their customers to buy other devices in the near future has already appeared in the international press: Apple M1 SSD wear issue ! 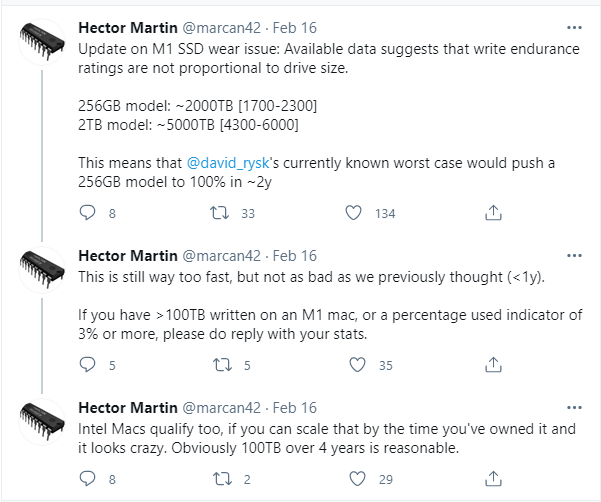 On Twitter & many other forums, users of the latest MacBook Pro, MacBook Air and Mac Mini models are reporting SSD (solid-state-drive) wear rates far higher than expected. If the figures are accurate and the trend continues, it could mean worryingly vrey-short lifespans for Apple’s latest notebooks.

But the real problem with this M1 Mac is that everything is practically “glued” (soldered) to it, meaning it is virtually impossible to change a memory DIMM/SIMM, an SSD or a faulty video card on your own.
In fact, there is no possibility of upgrade …

Apple is practically forcing M1 Mac users to sooner or later throw their laptop in the trash and buy a new one!

If at present there are still Apple laptops on the market that are over 10 years old and still work very well, this will not happen with current models, because every day of its use, leads to constant and irreversible wear of the SSD!

It should still be a lesson for everyone who will try such tricks with their customers in the future: Some parts must remain easy to change, and the SSD is a piece that must remain accessible and easy to change, otherwise you make fun of customers, it is theft on the face !

the legislation should force manufacturers to make devices that are much easier to service, not to fill the world with electronic garbage, for which very expensive and polluting resources have been used!